What kind of leader does the UN need? Results of our 2016 Survey on the Next Secretary-General


A new Secretary-General of the United Nations will be selected in 2016.

Who should be the next UNSG? How should they be selected? and What should they focus on most urgently?

These are the questions that FUNDS' recent Survey on the Next UN Secretary-General sought to explore. 768 people from 114 countries shared their opinions on the selection of the world's top diplomat, and the kind of individual they would like to see take up this important position.

This appointment will have important consequences both for addressing global challenges and for the internal reform of the UN itself. The world needs and deserves the best possible person for the job, and many people are raising questions about the existing selection process. As everyone has a stake in the decision of who the next UNSG will be, the views of people from all backgrounds and occupations were welcome in this Survey, though a large proportion of respondants were people who work, or have worked, at or for the United Nations.

The key message from the Survey responses is that people are looking for a strong, independent leader, and that they want a more open, democratic selection process. These findings were first presented to the public in an article in The Guardian on 30 March: UN workers want open race for next secretary-general, survey reveals
The Survey is also the subject of FUNDS' March 2016 briefing paper: The Next UN Secretary-General: Views from UN watchers

To contribute to this increased transparency, FUNDS co-organised the first ever public "Meet the Candidates" debate - in partnership with The Guardian, UNA-UK and the New America -  in New York on April 13th, where members of the public posed questiions to four prospective UNSGs. More information here. A second event will be held in London in June: more information and tickets here.

Thank you to everyone who took part in our Survey.  Here are the results!

1. "Political independence, integrity and courage" is considered the most important personal quality in a UNSG - selected by over 80% of survey respondants. 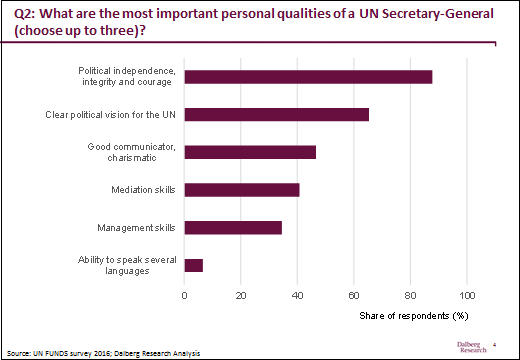 2. Peace & security, the SDGs, and Internal UN reform, are considered the top three urgent areas of concern for the next UNSG. 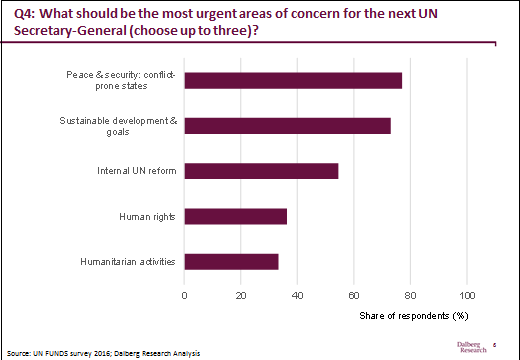 3. Encouragement of candidates of both genders is the most important element to include in the process of selection. 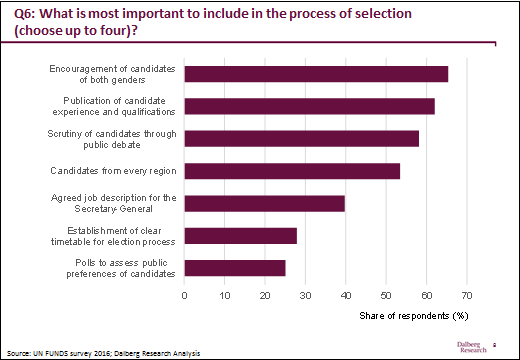 4. The most frequently named preferred candidate was ... Angela Merkel, followed by UNDP chief Helen Clark, and President of Chile Michelle Bachelet. Eight out of the top ten most recommended candidates are women; four of the seven candidates who have so far been formally nominated by their governments for the position of 9th UNSG are included in our top ten. 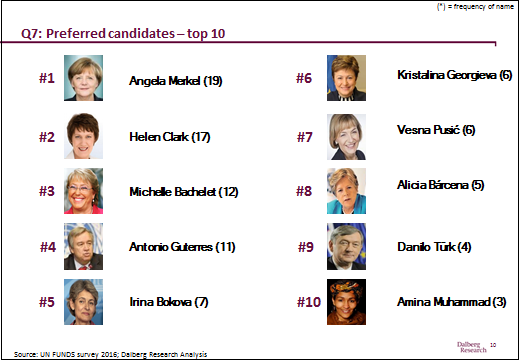 Have you seen our animation on Selecting the Next United Nations Secretary General?