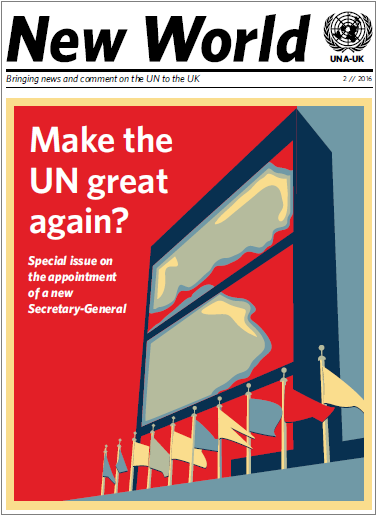 Issue 2/2016 of UNA-UK’s New World magazine, published on 20 September 2016, focuses on the upcoming selection of the UN Secretary-General, which both UNA-UK and FUNDS, as members of the 1 for 7 Billion campaign, have been watching very closely.

This "Make the UN great again?" special edition includes an article by FUNDS’ co-Directors Stephen Browne and Thomas G. Weiss highlighting the innovations and importance of this year’s "other" election:

“Sometime later this year, a new UN Secretary‑General will be selected to take over from Ban Ki‑moon in January 2017. Why is the choice of the ninth head of the world organisation so important? And how has the election slog been going? […]

In a recent FUNDS survey of experts and UN‑watchers, respondents were asked to name their preferred candidate. The name most frequently mentioned was Angela Merkel. She is not (yet) looking for the job, but she is the kind of person who should occupy the office on the 38th floor of UN headquarters on 1 January 2017.”

The “other” election: appointing the ninth UN Secretary-General by Stephen Browne and Thomas G. Weiss can be read in full here.

Make the UN Great Again? also includes proposals for how the next UN chief should approach the multitude of challenges facing the international community – from Mark Malloch‑Brown’s manifesto for his or her “first 100 days” to a tongue‑in‑cheek list of UN home truths. In addition, Yasmin Kamel explores online campaigning and Shazia Rafi and Yvonne Terlingen debate the merits of the push for the first female Secretary‑General.

13:51:18 30.03.2017 | health benefits
7I286
It is appropriate time to make some plans for the future and it is time to be happy. I have learn this submit and if I could I desire to counsel you few fascinating issues or tips. Perhaps you can write next articles regarding this article. I wish to read more issues approximately it!
health benefits http://healthhints.eu
21:03:54 24.03.2017 | higher education
9878Y
You really make it seem so easy together with your presentation but I to find this matter to be really something which I think I might by no means understand. It sort of feels too complicated and very vast for me. I'm looking forward to your next put up, I'll attempt to get the cling of it!
higher education http://edutips.eu/
17:55:01 23.09.2016 | Adel fathi
Adel fathi
UN is great in theory we need it to be great also in practice .