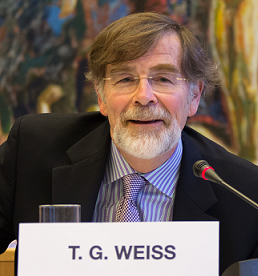 Tuesday, 19 April 2016:  FUNDS is delighted to announce that its co-Director, Professor Thomas G. Weiss, has been awarded a 2016 Andrew Carnegie Fellow for research and writing exploring the concept of  A World Without the United Nations, in particular how the 70-year-old institution could be more creative and effective.  Professor Weiss is the Presidential Professor of Political Science and Director Emeritus of the Ralph Bunche Institute for International Studies at The City University of New York’s Graduate Center.

The Andrew Carnegie Fellows Program provides the most prestigious and generous fellowships advancing research in the social sciences and humanities, awarded to established and emerging scholars, journalists, and authors whose work, according to the Carnegie press release, “distills knowledge, enriches our culture, and equips leaders in the realms of science, law, business, public policy, and the arts.” The anticipated result of each fellowship -- also known as 'brainy awards' -- is the publication of a book or major study.

This year, 33 winners were announced, from among almost 200 nominations. The chair of the panel of jurors, Susan Hockfield, President Emerita of the Massachusetts Institute of Technology, said: “We reviewed proposals from the nation’s preeminent scholars and thinkers, as well as from the next generation of promising thinkers and writers. This year’s fellows represent a remarkable range of institutions and organizations, and all share a determination to bring new insights to their fields of study.”