Emerging Powers and the UN: What Kind of Development Partnership? 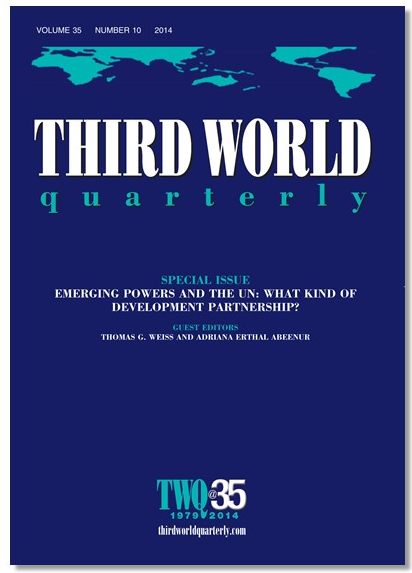 Emerging Powers and the UN: What Kind of Development Partnership?

This Special Issue is available on the Third World Quarterly website here.

Whether the phenomenon of emerging powers reinforces the North–South divide or increases the diversity of positions and alignments within the international system, remains very much open to debate.

The ten essays in this volume (see below for full Table of Contents) address this debate and are the product of a fruitful collaboration between the Institute of International Relations at the Pontifical Catholic University in Rio de Janeiro (and its affiliated BRICS Policy Center) and the Future UN Development System Project of the Ralph Bunche Institute for International Studies.

This joint research effort sought to analyse the changing role of emerging powers in light of ongoing intergovernmental discussions about the UN's capacity to foster sustainable development. By bringing together a mix of practitioners from inside and outside the UN and academics specialising in development and in South–South cooperation, a conference held in Rio in April 2014 provided the opportunity to test analyses of these dynamics from a variety of perspectives and to foment debate about the politics and policies of development governance in the post-cold war era.

2. “South-South Cooperation and the International Development Battlefield: between the OECD and the UN” by Paulo Esteves and Manaíra Assunção

3. “How Representative are the BRICS?” by Ramesh Thakur

4. “The Financing of the UN Development System and the Future of Multilateralism” by Bruce Jenks

5. “Seizing the Power or Ducking for Cover? Emerging Powers at the UN” by Silke Weinlich

6. “A Changing World: Is the UN Development System Ready?” by Stephen Browne

7. “South-South Cooperation and the Future of Development Assistance: Mapping Actors and Options” by Paulo de Renzio and Jurek Seifert

21:52:57 02.03.2016 | seo
47ARH
Hello Web Admin, I noticed that your On-Page SEO is is missing a few factors, for one you do not use all three H tags in your post, also I notice that you are not using bold or italics properly in your SEO optimization. On-Page SEO means more now than ever since the new Google update: Panda. No longer are backlinks and simply pinging or sending out a RSS feed the key to getting Google PageRank or Alexa Rankings, You now NEED On-Page SEO. So what is good On-Page SEO?First your keyword must appear in the title.Then it must appear in the URL.You have to optimize your keyword and make sure that it has a nice keyword density of 3-5% in your article with relevant LSI (Latent Semantic Indexing). Then you should spread all H1,H2,H3 tags in your article.Your Keyword should appear in your first paragraph and in the last sentence of the page. You should have relevant usage of Bold and italics of your keyword.There should be one internal link to a page on your blog and you should have one image with an alt tag that has your keyword....wait there's even more Now what if i told you there was a simple Wordpress plugin that does all the On-Page SEO, and automatically for you? That's right AUTOMATICALLY, just watch this 4minute video for more information at. <a href="http://www.SEORankingLinks.com">Seo Plugin</a>
seo http://www.SEORankingLinks.com/
10:41:31 07.06.2014 | James Greyson
Lead radical reform with 'software' of inspiration not hardware of governance machinery
The many great minds among the UN and their national collaborators are not intrinsically locked into institutional boundaries and solutions as usual. Given an effective forum for new thinking, such as FutureUN, a small number of people could quickly go from reimagining development to refining policy proposals to get it. This 'software' of radical reform could run both in existing UN hardware of institutions and governance mechanisms and in the future UN hardware that could and should be capable of leading the global multi-issue problem-solving that has been awaited for 40 years.

My tip for making this work would be to follow the lead of this blog and reframe the niche-interest of sustainable development into a mainstream-interest 'global security' where everyone can more clearly see that outcomes (for jobs, growth, finances, peace, ecosystems, climate, water, food etc) are irreducibly indivisible and can be effectively managed only as a whole system. Hence the core future role for a whole-system-thinking UN?

I've elaborated more in this NATO-published piece which is part of a paper with policy proposals for how to do it, http://blindspot.org.uk/global-security/ Happy to discuss @blindspotting